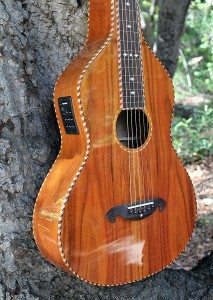 As you might know, our workshop is in Montecito, California, recently famed for wildfires and mudslides. We just barely dodged the fires. We were surrounded on three sides by flames but they managed to stop the fire at the next road over from us, so that was just a bit stressful.

Then just after we were able to get back in here after being evacuated for 10 days, the mudslide came and we did not dodge that one. Our workshop was hit with a wall of water and debris which washed away most of our machinery and left 2 feet of mud in the shop. So we have a little work to do and a lot of stuff to replace.

The only good news part of this is that we don’t actually keep the guitars in the workshop, except for whatever we are working on at the moment, so the workshop is toast but the guitars were fine. it did take us kind of a while to get everything put back together but we are back in action and we have just finished up the 2020 run, so we actually have everything in stock and ready to go.

This last year we had a lot of interest in the two high end models, the Ali’ki and the Koa, so we’ve stocked up on those, as well as the Limiteds and Classic-T’s

I wasn’t going to make any Double O models this year because nobody was buying them…until suddenly lots of people were buying them, so I made up a handful in Koa because it’s just so damn pretty.

We’ve pared down the Weissenborn models to the four most popular, so we’ve been able to reduce prices a bit for you, even though we’ve upgraded the features. All models now use the deluxe gold and ebony tuners and all models are sporting diamond inlays, except the Ali’ki Special which uses the pre-war Martin style snowflake inlays.

I’ve also changed to using mahogany or koa fingerboards on all models, partly because of the new hassles with importing (and exporting) rosewood, and partly because it’s a more authentic way to build these things. Also I think it looks pretty cool. I’ll get new pictures up as soon as I can dig my camera out of the mud and find someplace to do it. The tree where I usually photograph the guitars survived the flood but now has a new enormous boulder in front of it. It’s too bad, the light was always great on that tree.

We’re also going to be doing more wood and metal bodied resonators this year. We spun off the resonators into a new line called Royall last year and we’ll keep working on that project as we get time.

Feel free to keep leaving us comments and feedback. We value your input.